today is the 41st anniversary of the Moon Landing. I was 12 years old and watched every minute of it that I could on CBS News. Those were the days, watching Walter Cronkite and Wally Schirra as commentators. 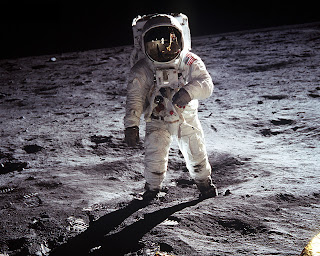 My family gathered around the television and watched the TV late into that Sunday night as Houston decided to let Neil Armstrong and Buzz Aldrin begin their EVA early. Those were heady times for a young boy of 12 with strong interests in science, astronomy and radio. I am very glad that I was alive during the era of the "space race". That was an exciting time that we will probably never see again.