With the Buddistick out of commission until the new whips arrive, I was forced to resort to using my zip cord 88' doublet antenna (always good to carry SOME kind of backup!). It is quite a pain setting up a doublet antenna for just an hour or two of operating. If "in and out" quickly is your main goal - then the Buddistick or PAC-12 is the way to go. The time it takes to set up a doublet or dipole takes away from operating time.
Getting back to setting up the doublet - I used a hint from Jim W1PID. Instead of using my slingshot and fishing weights to get line over a tree limb, I tied some line to a 20 ounce water bottle and flung it up over a couple of tree branches about 20 - 25 feet high or so. While doing this, a couple of women came into the park I was using - once they saw me heaving a water bottle over a tree limb, I think they took me for a crazy person and left! I was waiting for the police to arrive shortly thereafter; but they never materialized. In case they had, I always make sure to carry both my driver's license as well as my Amateur Radio license.
The 88' zip cord doublet loaded up easily on all three bands that the PFR3A has - 40, 30 and 20 Meters, using the PFR3A's built in tuner. There was a little activity on 20 Meters; but it was all at the low end of the band and at the noise level; so I didn't bother. 30 Meters was dead; but 40 had a very few sparse loud signals. I called CQ for a while and was picked up by Don KU4WE who hails from Lexington, VA. 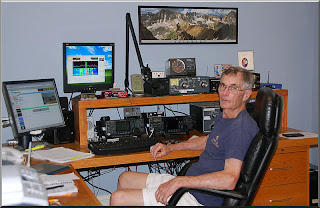 Don was using a Flex5000 at 100 watts to a rotatable dipole at 65 feet. He was a solid 599 and I got a 459 report from him, which I don't consider to be all that bad considering the antenna. We chatted for a few minutes until QSB started killing my QRP signal and we each bade our 73s.
I was going to continue on for a bit; but some workmen started using the park for a lunch spot and some local kids came to start using the basketball hoop. I decided to call it quits and packed up everything for the day. I took the advice of Jeep off roaders whose motto is, "Leave no trace behind", and made sure that there was no sign left of my excursion for the locals to complain about.
72 de Larry W2LJ
Posted by Larry W2LJ at 1:30 PM