Those of you who use my blog as a jumping off point for other Ham Radio blogs may have seen Dave K2DSL's post yesterday about the First Day cover of the 1964 postage stamp commemorating the 50th anniversary of the ARRL.  The stamp was commissioned by the Post Office not only to celebrate the the League's milestone anniversary, but to also honor all the volunteer man hours unselfishly rendered by brave Amateur Radio ops who provided communications (sometimes the only communications) for many areas after  "The Great Alaska Earthquake of 1964" - hence the cancellation mark of Anchorage, Alaska.

Over the years, I have found and acquired nine different versions of that First Day cover.  I owe that in large part to my Dad and my maternal grandfather who were both into stamp collecting.  They passed on to me not only parts of their collections; but a passing interest in philately as well.  I don't currently collect stamps with any great fervor; but I do like to look at what I have; and I'm always on the lookout for stamps related to the space program or Amateur Radio.

I am not going to post all nine First Day covers that I own all at once; but will space them out and will post one every night or so for the next week or so. You've seen the one Dave posted with the two young Hams and their Elmer.  I have that one also; and will post that last. 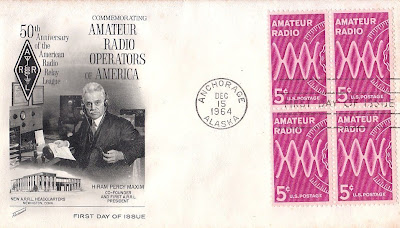 You can click on the image for a closer view.
This first one features Hiram Percy Maxim, the co-founder of the League; and its first president.  This First Day cover also features an engraving of the then new ARRL headquarters building.

I do believe that there may be one or two more versions of this First Day cover out there.  I haven't been successful in finding them - so far.  I have always had it in the back of my mind to have these mounted and framed in one big display for the shack wall.  Yet another project for someday!