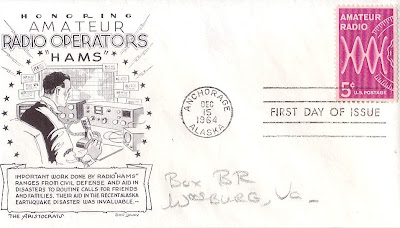 Again, you can click on the image to make it bigger and see more detail.

This cover features an illustration of a Ham actively working his station. And from the caption, it seems like things have not changed much.  Back then, as now, we are constantly reminding the general public that we are there when "stuff" hits the fan.  Not merely a bunch of odd looking geeks involved in an esoteric hobby that no one quite understands.

I would imagine that back then, in 1964, our predecessors were also engaged in a constant PR battle to make the general public aware that "we" were not always the source of their TVI problems.  With satellite and cable, we have the advantage today, although problems do still crop up from time to time.

On another note, I have finished my homebrew antenna launcher.  Not anything brilliantly new or innovative - just my version.  I will try to post some pictures later tonight after I get home from the Raritan Valley Radio Club meeting.