Not knowing exactly where or what this station was, I jumped into the fray, anyway.  At 23:42 UTC, I made it into the logbook.  30 Meters doesn't play so well on the G5RV; so I made this QSO using the Butternut HF9V vertical.

It seems that Leon was originally founded in the year 1524 by Francisco Hernandez de Cordoba.  The city was relocated about 20 miles to the west after it was severely damaged by flooding from Lake Managua.  The flooding was the result of an eruption of the Momotomba volcano in 1610. 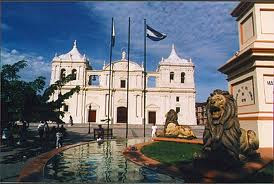