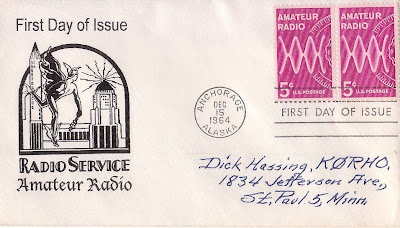 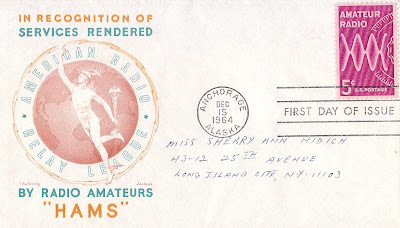 These two feature Mercury - the Greek god, not the planet. The top one has some buildings, with what seems to be radio waves emanating from the top of one of the buildings.  The bottom one features Mercury against a backdrop of the globe.  However, this second one is more in tune with the public service theme.  While the League is certainly mentioned, the main theme seems to be about "Services Rendered".  Very nice.

I wonder if Amateur Radio will rate a stamp on the 100th anniversary of the ARRL in three years.  Whose ear should we put a bug into about that?

I suppose most of you by now have seen that tower climbing video that was on YouTube.  It seems to have been yanked from a lot of sites due to a copyright issue.  But if you search for it, you can still find it.  I am NOT fond of heights and I can get the sweats while climbing an extension ladder.  I fell off a ladder when I was eight years old, and while all that happened was getting the wind knocked out of me, I still have major problems with precarious heights to this day.  Being at the top of tall buildings or being in an airplane doesn't bother me.  But being on top of a ladder or on a roof, where I know that it's easy to fall, I have a lot of difficulty.  Watching these guys climb that tower was making my stomach start to feel just a bit queasy.  You have to know that if I had a Ham radio tower, that it would be a crank over!