Oh well, Mississippi's week has come and gone and I missed out.  For the first part of the week, operations were confined to 60 Meters - a band and mode that I do not have access to.

Jim W4QO rounded up some help on Sunday, but I spent the day at my Mom's.  By the time I got home, the station that had volunteered for the day was long gone.  Maybe during "Makeup Week" at the end of the year - who knows?  Right now, if memory serves me correctly, that makes this my 3rd state missed this year out of all that have been on so far.

On the bright side, I did raise some money towards a KX3 this weekend.  Back in the days when I was full blown, hog heavy into photography, both as a pastime and a profession, I had purchased an antique Graflex camera at a flea market.  Paid all of $25.00 for it. 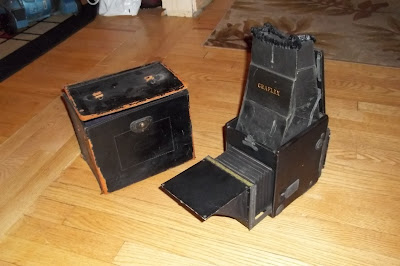 I got $150.00 for it on eBay over the weekend - so I am officially on my way!  At this rate, I will not be in the first series of orders, but I have made some headway.  I have two bugs that I would like to sell - an Old Vibroplex Lightning and a E.F Johnson Speed-X bug.  I may be putting those on eBay also.

I received an interesting private e-mail with regards to my K1. "How much do you want for your K1 if you sell it?"  To be honest, I really didn't have any intention of selling it.  But if I were to, the asking price would be $575.00 plus shipping.

My K1 is a four band model - 40, 30, 20 and 15 Meters. It has the autotuner and the noise blanker built in. It also comes with the wide range tilt stand.  If you bought all that fresh from Elecraft, it would run you $610.00.  I know that's not that much of a price cut; but this is built and ready to go.  In both electrical and cosmetic shape, it's been babied.  In fact, it's the star of my QSL card: 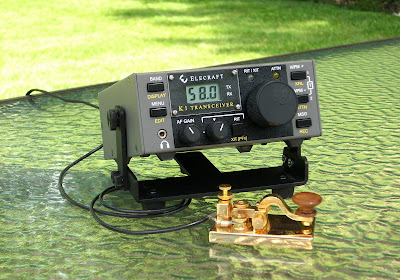 Hey, if you're interested - drop me a line, I can possibly be convinced!