Perhaps that KX3 won't be so far off as I thought it was going to be.

Yesterday morning, I took two old gold rings to three different gold buyers to see how much I could get for them. Let's say I ended up coming home with enough to get me about half way there. As you all know from previous posts, I sold an antique camera for even more funds.  If the K1 and the three bugs that I have listed on eBay go for what I am hoping for, I should have enough for the KX3 and the auto tuner.

Yes, I know I won't have it until February or later; but it would be funded and ordered.  I doubt that there are too many people who regretted the wait for their K3 when that first came out.

The KX3 would not only replace the K1, but it would contain more bands, including 6 Meters, which I have always wanted to try. It would also have SSB capability.  While that's not a mode that I would normally use, it is of great value when demonstrating Ham Radio to folks who are not familiar with it. Letting someone pick up a microphone and speak to someone across the country or in a foreign land on their first exposure is probably more enticing than just listening to dits and dahs.  Although I do admit, Morse Code does always seem to attract its own group of fans.

I should really be careful to not count my chickens before they hatch; but seeing savings progress is getting me more excited about the possibilities.

Shamefully, I have not partaken in any serious CQ WW DX operating this year.  I listened around a bit on 10 Meters yesterday morning and worked a couple European stations - nothing exotic at all. I haven't been on the radio at all today.  A combination of other chores to do and just being a bit tuckered out after all the Thanksgiving house prep and then the cooking.  The turkey came out great and all who came over, liked it - which is a good thing.  Leftovers tonight for dinner. Yum! 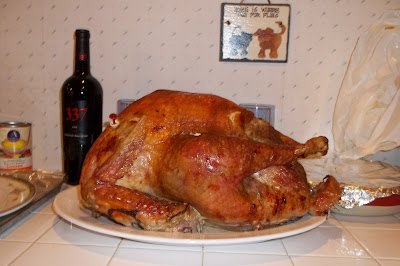 Email ThisBlogThis!Share to TwitterShare to FacebookShare to Pinterest
Labels: KX3