Unlike a lot of folks who are not in the retail business, I did not have the day off today. So it was nice to come home to two pleasant surprises in the mail box.  The first was the Ramsey catalog.  I'm not a big buyer of their kits, but it's nice to have a catalog to peruse through.

Second was a large 9X12 envelope. I had no idea what it was. It turned out to be a very beautiful certificate and handsome QSL card from working the N4V special event station that commemorated Vibroplex in Norcross, Georgia.  Because of the Morse Code and bug connections (things near and dear to my heart) this one will definitively get framed and placed in a prominent place on the shack wall. 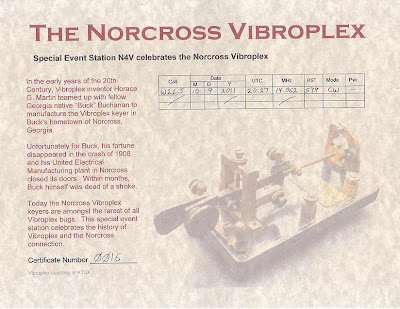 Hands off to the organizers of the event!  It was a first class operation and first class mementos to remember it by.