I seem to get requests from time to time, to bring up this topic on the blog.  I can only speak for what has worked well for me.  There are as many number of solutions to this as there are QRPers who like to go out into the field, and I have only tried a relatively minor few.

The first thing to consider is what kind of portable operator are you?  Some of us are “Time is precious! Let’s get on the air and operate!”  If you’re one of these (like me!) then you are interested in ease and quickness of deployment.  The faster up, the faster I can get on the air.  Although antenna efficiency is important to you, it is not your primary concern.  You don’t want to be pumping RF into a string of wet pasta; but you want to spend your day outdoors operating – not finagling with antennas.

For this type of operator (and I belong to this species) I have two recommendations:

1 – EFHW antennas.  Basically, a piece of wire that is a half wavelength of the band you intend to operate.  A matching device or counterpoise is needed.  There are oodles of articles on EFHW antennas.  The best seem to be treatises by Steve Yates AA5TB and Joe Everhardt N2CX.  Google “EFHW” along with their call signs and you will get there.  If rolling your own doesn’t appeal to you, you can also purchase commercial versions. LNR Precision markets perhaps the best known models, the PAR ENDFEDZ series.

The name says it all - “End fed” – meaning needing only one support.  Basically, you throw a bottle (or some other weighted object) into a tree to get a hoist line over a branch, attach one end of the wire to the hoist line  and pull it up.  The other end connects to the matching device or your radio and you are good to go.  It’s simple, uncomplicated, and works well.  If you read any of Jim W1PID’s blog posts on AmateurRadio.com, you will see the resounding success that this type of antenna can provide.

Personally, I use the PAR ENDFEDZ 10/20/40, which will allow me to operate on those three bands without changing radiators.  If you want to operate on a different band, you can change the radiator wire.  The PAR comes with a chart that tells you, for each band,  how long a piece of wire to use with their match box

2 – Compact verticals.  What do you do if there are no supports?  A Buddistick or a PAC12 antenna could be the solution for you.  Both of these are basically the same idea.  A compact vertical which uses a tapped coil to make up for the fact that you are not deploying a full sized vertical.  You will have to bring a ground spike or small tripod or some other self improvised arrangement to deploy one of these.  You will need to use either radials (as recommended for the PAC12) or a counterpoise wire (as provided with the Buddistick).  This is not a true counterpoise, per se, but is more the “other half” of the vertical dipole that you are using.

Set up is relatively quick; but not as quick as the EFHW, especially if you are good in tossing bottles over tree branches!  It takes time to deploy the radials in the case of the PAC12 and the amount of “counterpoise wire” used with the Buddistick is critical.  The length will affect the SWR of your installation.  For both of these, it is handy to bring along a small antenna analyzer along (such as one of the Auteks) to help you tune the antenna rather quickly.

There is another way to deploy one of these compact verticals, which was brought to my attention by Bob W3BBO.  It worked well for him when he was living in an apartment for a while, and I used it and in turn, discovered that it worked well for me, too.  Instead of using a tripod, painter’s pole, ground spike, or whatever as a support for these compact verticals, you can instead attach the vertical to some kind of mount and attach it to your car.  I use one of those Lakeview tri-mag mounts.  Attach the vertical to that, pop it on the top of the car and go to town.  Yes, you have to find the best place to tap the coil, but the car acts as a great groundplane and there’s no need to fuss with counterpoises or radials.  It has worked well enough to garner DXCC and WAS for W3BBO while he was apartment living.  I have used this arrangement during outdoor QRP sprints and while on vacation and have had surprisingly good results.  This is NOT to be used while your vehicle is in motion however – strictly stationery mobile! 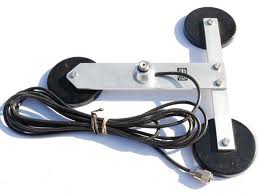 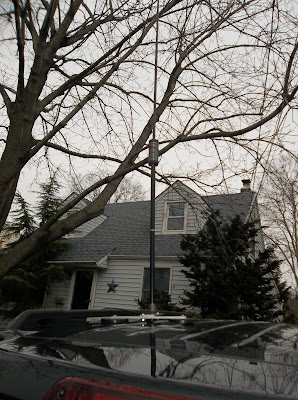 As a side note, I have used Hamsticks which are kind of related to this.  They are quicker to deploy than either a Buddistick or PAC12 plunked on your car.  However, you have to have a different radiator for each band that you intend to operate on. And my feeling (and I have no empirical proof to back this claim up, so take it with a grain of salt) is that Hamsticks are less efficient and even more of a compromise than a Buddistick or PAC12.

Now if you have a lot of time to operate, or if maximum efficiency is a concern to you, you have other solutions that you can pick from.   In instances like these, you might want to use a dipole or doublet, made from lighter weight materials.  Say you’re going camping for a week and there are plenty of tall trees available – why not?  Even if you decide to use one of these as a sloper, you’ll need to keep the low end roughly six feet off the ground for safety reasons.  You don’t want any unaware pedestrians walking into your wires! So you will need TWO supports - if you use heavier materials - then maybe even three.

I have made 44 and 88 foot versions of the Norcal Doublet.  I have made them both out of ribbon cable and speaker wire.  The ribbon cable is way lighter; but the speaker wire seems hardier. I have used the speaker wire just like the ribbon cable – that is, as feeder and radiator all-in-one.  What can I tell you?  They work well.  Not as efficient as a dipole fed by open line wire or coax; but well enough for temporary operations. The only thing is that you need two trees, ideally, and you need to get the wire up as high as you can.  Other than that, they will get you one the air.

There’s a good series on YouTube, by GB Hoyt  on deploying W3EDP antennas.  I have one of these as one of my permanent station antennas. There’s absolutely no reason that one can’t be made from light weight materials and taken out in the field.  It is a great multiband antenna and requires a balun and a tuner; but it is an option.

This is by no means an exhaustive or authoritative list. I am sure there are many, many more options available to you – limited perhaps, only by your imagination.  But what I have listed here is what I have tried and they have worked well for me.

Here is a good resource: