I took the test for my Novice license in November of 1978.  I received my ticket in the mail at the very end of December 1978.  I remember that I was sitting, taking a break from my job at the camera store where I was working.  We were having a post-Christmas sale and it had been a frantic day. My Mom had called to tell me that I had received the vaunted envelope from the FCC and that my call was KA2DOH. Between that time and my very first QSO, I was occupied with putting my station together.

For some reason, in my mind, I always remember my first QSO as having taken place on January 29th, 1979.  But a look in Logbook Number One reveals the date as January 28th, 1979 - so the 34th anniversary of my very first QSO was yesterday! 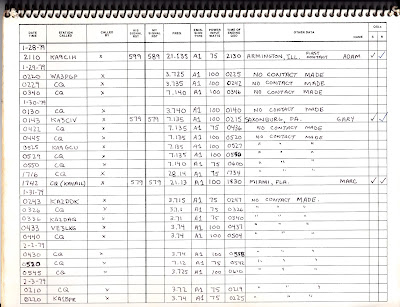 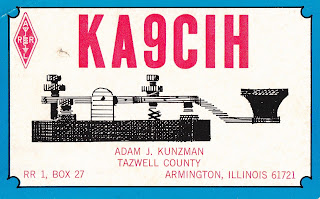 As far as I can tell, Adam is no longer active or even licensed. KA9CIH doesn't come up at QRZ.com, nor does it come up at N4MC's Vanity Headquarters. A search on his name returns nothing, either.

From my log, I can see that was the only contact I made that day.  I guess I was so petrified from that initial 20 minute QSO, that I didn't go near the radio for the rest of the day!

The station in my bedroom at my parent's house consisted of a Drake 2NT transmitter attached to a Globe VFO (by 1978, Novices were no longer constricted to being crystal controlled.)  This used VFO had a cable coming out of it that had a crystal base soldered to it.  So not knowing any better, I just plugged that into the 2NT's crystal socket.  I didn't blow myself up and it worked!  The Drake 2NT was my parent's Christmas gift to me that year.  They purchased it (under my direction, as a result of several well placed hints) from the used equipment list from Burghardt Amateur Supply.

My receiver was a Heathkit HR-1680, which I had bought and built myself. My camera store salary was allowing me to make "OK" money at the time.  I wasn't getting rich; but I was able to afford a few hobby items here and there. (Still ain't rich to this day!) The purchase and construction of the HR-1680 was the reason for the month's delay between receiving my ticket and actually getting on the air.

My antenna was a wire that stretched from my bedroom window to our unattached garage, ran through an insulator there, bent at a sharp angle and was anchored at another second story window on a different side of the house (imagine a slightly sloping horizontal "V").  I soldered a piece of coax to the end of the wire - center conductor to the "long wire" and the shield I connected to the cast iron radiator in my room.  The radio end of the coax went to an MFJ tuner.  I switched between the transmitter and receiver using a double throw knife switch.  That this "Rube Goldberg" mash up worked was a miracle; and the fact that I made contacts at all was an even bigger miracle.

I worked all the Novice subbands available to me on 80, 40, 15 and 10 Meters.  There were times that the old MFJ tuner would spark and hiss at me on 80; but I had a ball, anyway.  To this day, I have the feeling that if I went back in time and saw that set up, knowing what I know now, I would probably shake my head and tell my younger self how crazy I was.

I look at my log and see how I logged EVERYTHING - unanswered CQs and all.  But that was good because looking at it now brings back so many vivid memories.  I upgraded from the 2NT a few months later to a Kenwood T599D after my Globe VFO crapped out.  I had the Heathkit and Kenwood setup until I ordered and built my Heathkit SB-104A. I distinctly remember soldering SB-104A boards while watching the 1980 Winter Olympics on TV.

I upgraded to General on June 2nd of 1979.  I'll never forget THAT day.  Somehow, the Morristown, NJ Club had gotten the FCC to come to their hamfest to give exams.  I wasn't about to miss the grand opportunity of taking my General test without having to travel to Manhattan, even though I was sick as a dog that day with about a 102 fever.  And it was sweltering outside that day to boot, and to make matters worse, the hamfest and exams took place in the UN-air conditioned Morristown Armory. I was in no condition to drive; and somehow I wangled my sister into driving me, waiting for me and driving me back home.  But in a strange way, I think being sick was a help, as I was feeling so lousy that I didn't have the normal pre-test "jitters". They graded the tests right then and there, and I was told I passed and was given the AG designator so that I could use my new privileges immediately.

I don't have a copy of my Novice license; but I still have my General license.

Looking further at my log, I see that I made very few A3 QSOs after upgrading.  I discovered the hard way, by the ire of my family, that SSB screwed up the TV - royally!  I pretty much stayed with CW with only occasional "very late hours" phone QSOs.  And I couldn't stay up too late as I was a working man - so the overwhelming majority of my QSOs (roughly 95 -97%) have been CW since that original one back on January 28th, 1979.