Today was a lot of fun

Well, actually last night AND today were a lot of fun!  And there's more to go tonight as the 40 Meter QRP Fox hunts start up again tonight.

I ended up working only three stations last night. First, I had a quick 2X QRP QSO with Dave NE5DL down in Texas on 20 Meters to start SKN off.  That was followed by two rag chews. The first was on 40 Meters with N4LZY, Jerry in Tennessee and was followed by a chew with K3OWZ, John in PA.  John was  using a Heathkit Apache and a National NC303 receiver.  Good stuff!

I was on the air off and on for a good portion of today. I worked Dan SM5IMO in Sweden, and had a nice chat with John VE1BA in Nova Scotia.  John was running three Watts and had a killer signal into NJ.  That was followed up by a nice chat with another John - K4BAI in Georgia.  John and I meet up in the QRP sprints and the Fox hunts.  John is a "Ham's Ham" and a gentleman to boot.  It's always extremely nice hooking up with K4BAI.

The I had an experience that was unique.  I was working Stan AEØSL on 20 Meters when the band kicked out on us and we both faded away into the QSB.  From there, I jumped on up to 17 Meters and worked VP2MRV in Montserrat.  After finishing up with Nao, I began to tune around 17 Meters and whom should my wandering ears hear calling CQ?  None other than Stan AEØSL, who I had just worked only minutes before on 20 Meters.  He was much, much louder on 17 Meters and we were able to finish up our busted QSO.  Now how many times has that happened to you?  Dare I say - not many?

I then finished up my afternoon by busting a small pileup to work K1GI/VP9 in Bermuda.  A pileup for Bermuda you ask?  Well, yes.  There were hardly ANY signals on 17 Meters, so in this instance, even Bermuda was like chum to a shark. 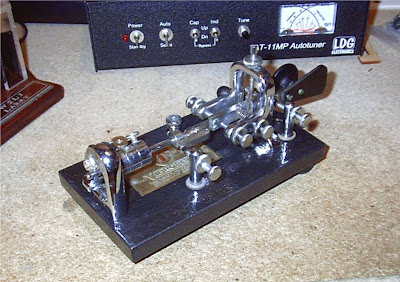 Last night and today, the majority of my Morse was sent with my Vibroplex Original that I restored a few years back.  I was surprised how quickly I was able to send decent  presentable code.  It's like the old adage about riding a bicycle - that once you learn, you never forget.  I didn't sound atrocious to the point that I was embarrassed to be using it; because believe me, if I was that bad I would not have subjected anyone's ears to a bad cacophony of dits and dahs.  Also, the Reverse Beacon Network was picking up my CQs, so the skimmers were able to decode my sending.  And if the computers were able to figure it out, then a real live Ham should have had even less trouble.

It's been a long time since I've had the opportunity to spend so much of a day in the shack, behind the radio. I thoroughly enjoyed it and could get quite used to it, given the chance.