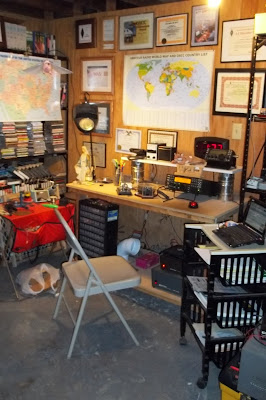 Compared to what it was before, the W2LJ basement shack is now pretty organized.  About a dozen large green garbage bags went out to the trash.  Some was mine; but a lot was some ceramic pieces that I had been storing for my Mom for the last nine years after she moved out of our house and into her apartment.  This shelf was totally filled with boxes of paints and ceramics - now it has radio and electronic items on it. 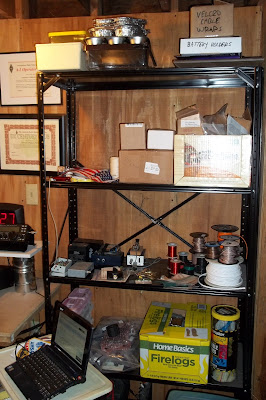 Those empty firelog boxes come in handy.  One is holding various empty enclosures that I have collected over the years.  The other has my collection of unfinished kits.  I have to sort through those and see if there's any that I want to sell.  But parts tins, egg crates, rolls of wire and cable, cable ties, various parts and pieces all have a neat home now. 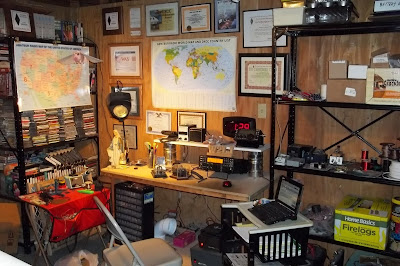 I have a relatively uncluttered operating space now; and my little tray table that I use for building is now uncluttered and very usable.  The World Map is new (and slightly smaller than the ARRL one that I had) as is the MFJ LED clock hanging on the wall.  My old Radio Shack one, which was about 20 years old was starting to lose some segments. 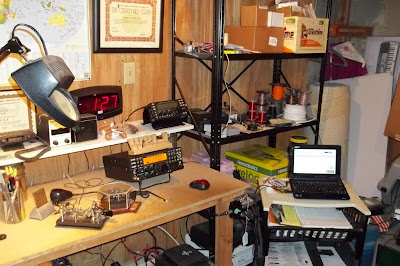 Down on the leg of the table is where I placed the new antenna switch.  The old one was on the wall; and I always had to lean forward to make an antenna selection change.  This is much better location now. 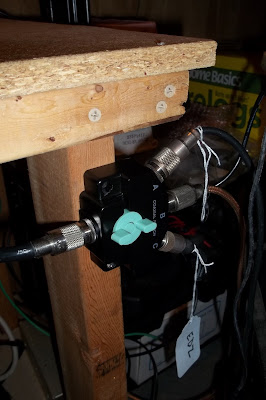 I would say that I am about 90% complete.  I need to go to Harbor Freight this weekend and purchase another 40 drawer storage cabinet like you can see in the lower left of the very top picture.  I have a lot of resistors, capacitors, transistors, etc that I have to sort, label and store.  That will take a while; but at least I have a functional uncluttered shack in which to do it now.

Before I left the shack for the evening, I disconnected the antennas from the switch. It reached 65F here today; but tonight we are expecting thunderstorms, 2 inches of rain and very gusty winds (maybe up to 60 MPH).  I don't want to take the chance of either radio getting damaged.