at lunch time today. I went to the park, threw the PAR ENDFEDZ into a tree and tuned up on 18.078 MHz.  Janez, S51DX was calling CQ and he was loud so I put out my call and got into his log.

I probably won't be able to get to the park until maybe Friday as the next two days are supposed to bring heavy rains to New Jersey.  I'm not complaining, as it's been a very dry spring (unlike the Midwest) and we can use the moisture.

The nice thing about the PAR ENDFEDZ 10/20/40 MKII, is that you can remove the factory supplied radiator and replace it with your own for any bands from 60 Meters through 10 Meters.  This evening, I cut and tuned a radiator for the 17 Meter band.  I used 18 gauge stereo speaker zip cord and pulled it apart. The other half I will use for a 15 Meter radiator.  I soldered a ring lug to one end and then had to figure out an insulator for the other end.

The insulator that comes on the factory radiator looks like this: 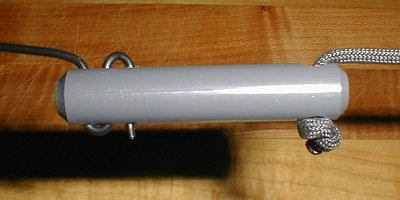 I don't have any solid plastic like that so I used the barrel of a stick ball point pen.  I cut it in half and drilled some holes and used the PAR insulator as a template.  Since this is always used as a very temporary installation, it will be more than adequate.

I saw on QRPSPOTS that John N8ZYA worked A45XR in Oman using 3 Watts and his indoor random wire antenna.  Great catch, John!  About 90 minutes later, I was giving it a shot using 5 Watts.  By the time I got on though, 17 Meters was changing, and even though the Omani station was still loud, he went QRT for the evening. Maybe next time.  That's the thing you learn with QRP - there's usually always a next time, even if it takes 15 years for someone to take another DXpedition to that island!