Beautiful day again here in New Jersey - but extremely busy!  Lots of chores, lots of running around and I didn't get everything accomplished that I wanted to.  But even at the end of a busy day, it's nice to step back, take a breath and spend a few minutes engaged in "The World's Greatest Hobby".

This evening, I spent some time twiddling the dial on 20 Meters.  At the very low end of the band GN4FOC was calling CQ with not a lot of takers. I am sure that if you are spending any time at all tuning up and down the bands, that you are hearing a bunch of stations with the "FOC" suffix.  These are all Special Event Stations celebrating the 75th anniversary of the First Class CW Operator's Club.  I was lucky to work the one tonight that is situated in Northern Ireland.  Jeepers, I just thought of something ..... does working an FOC station automatically terminate my membership in the SOC (Second Class CW Operator's Club)? Somehow, I don't think so.  Anyway, getting back to the topic at hand, I always enjoy working stations from Ireland and Northern Ireland.  My dear Mother-In-Law was born and raised in Ireland. She came from Donegal and many was the time she told me how Donegal is only a stone's throw from Northern Ireland. For this reason, I feel a sort of "in-law" connection to Ireland and Northern Ireland, if you will.

Just a side story. When I first started dating my wife-to-be and met my future in-laws for the first time, I happened to mention in conversation that I was an Amateur Radio operator.  I thought my dear future mother-in-law was going to have a heart attack!  I found out later that one of her brothers (who never left Ireland) was a Ham and had a huge tower with a yagi mounted on it next to the house.  Unfortunately, one summer he suffered a lightning strike and the entire house almost burned down.  One of the reasons to this day that when I mention the word "tower" to my wife I get looks that are ........ unpleasant, to say the least.

Then I had a very short QSO with John WB4MED down in Florida.  John and I have worked numerous times in various QRP sprints.  I was looking forward to a leisurely rag chew with him, but as luck would have it, propagation was not on our side. 589 signals quickly QSB'ed to nothing and what seemed like promising propagation dried up on us faster than spilled water in Death Valley. Such is the life of a QRPer!

A little bit later, I was calling CQ near the QRP watering hole of 14.060 MHz and was answered by Mario IZ6YLT in Pesaro, Italy. 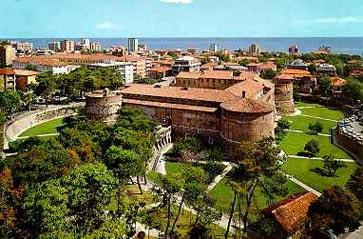 This was nice as it ended up being an actual QSO.  As it turns out, it ended up being a K3 to K3 QSO!  I was at 5 Watts and Mario was at 100 Watts. We gave each other 579 reports. I was on the Butternut while Mario was on his Hy Gain vertical - so it was a K3/vertical to K3/vertical QSO.  We exchanged weather information as a matter of course; and again, I was surprised that New Jersey was just a bit warmer than Pesaro. Of course, I'm the typical American who assumes it's always warmer on the Mediterranean than it is here!

The last QSO of the night was with Jerry W0PWE who hails from Johnston, IA.  I am not sure if this is a picture of the rig he was using ......... 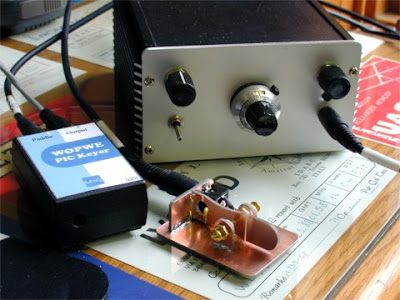 But as Jerry described it, his rig was "built from scratch" and was putting out one Watt to a dipole.  Jerry was 579, but there was more of the aforementioned deep QSB on both our ends, and I was afraid that the band was going to drop out on us without a proper good-bye, so we kept the QSO on the short-side.  Jerry, should you happen to read this, I just want you to know how great your one Watt sounded and during your sign off, you actually peaked at 599!  FB job!  I wish I had remembered to turn on HRD's audio recorder, otherwise I would have recorded Jerry's signal.

First sign of old age, guys, when you start to forget the obvious things!

73 de Larry W2LJ
QRP - When you care to send the very least!