And sometimes "the next time" is the next day!  That was the case for me and A45XR in Oman.  Where I was unsuccessful last night, I scored tonight.  Chris in Oman was VERY loud into New Jersey at the very end of 20 Meters - 14.005 MHz.  He was 599+ loud.  The kind of loud that you know in your gut that if you stick with him (and he doesn't QRT), you'll get him in the log. As I was listening to him pick off the stations, I heard him come back to Chris KQ2RP (author of Signal to Noise - KQ2RP), who lives all of 28 miles from me as the crow flies.  When I heard Chris A45XR work Chris KQ2RP (hey, that was a 2X Chris QSO!), I really started to feel confident.  And I was in the log about 5 -7 minutes later. First time to work Oman and via QRP. Life is good!

BTW, here's a picture of the insulator I fashioned last night from the pen barrel.  Sorry about the photo quality - I tried adjusting the exposure and contrast; but you'll get the idea. 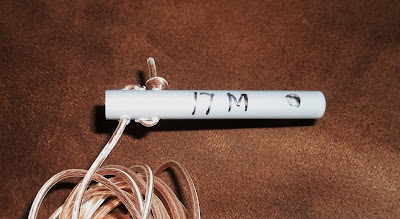 I received an e-mail from Joel N3GSE over the weekend, informing me that it's not legal to own a slingshot in New Jersey.  Who knew?  I had so many as a kid! I could argue (if ever questioned about it) that since it's attached to an "L" bracket and the projectile is attached via fishing line that it's technically an "antenna line launcher" and not a sling shot, per se. I'll have to ask my police officer brother-in-law about it.  Another stupid New Jersey law, if you ask me.

But as I was reading the statute (and I re-read it about 3 times to be certain), I saw that there was no mention whatsoever about pneumatic antenna launchers.  So I sent away for the following kit from the Joplin Amateur Radio Club: 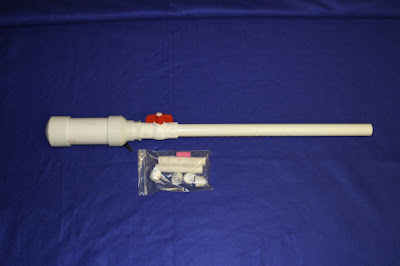 A bargain at $35.00 (plus shipping).  Not quite as convenient as the other antenna launcher as now I'll have to carry around a bicycle pump when I want to use it - but what the hey.  And it seems to get the job done:

At W2LJ, we desire to be law abiding citizens and not run afoul of the local constabulary!