I didn't need much of anything but did pick up some BNC to binding post adapters for easily hooking up speaker wire doublets to the K1 and PFR3A (and someday the KX3!).  I have a couple already; but these are the type of things I always misplace.  I also picked up a new computer microphone for a couple of bucks. 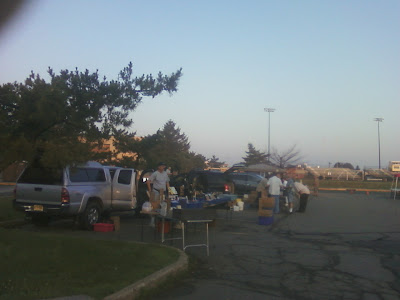 In the very early morning it was very humid and hazy.  The job I was tasked with was to direct the cars of the sellers into their spots in a neat and organized manner.  I'll tell you ..... when you arrive somewhere at 5:00 AM and you look down at your watch, 11:30 AM feels like a whole day went by! 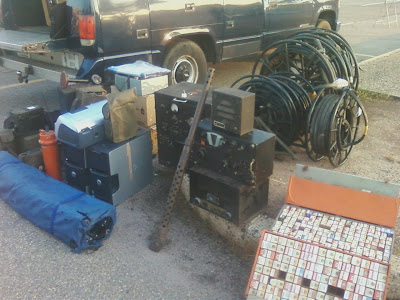 Where else but at a hamfest can you find a 50 Caliber machine gun barrel ? 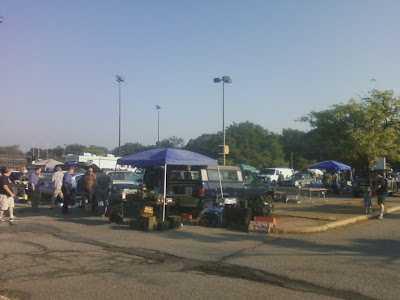 We had a good amount of vendors; but it was strange.  You could find computer parts galore; but there was only one guy selling coax.  Also there was a guy selling QRP antennas.  What the heck is a QRP antenna ?  I thought antennas were antennas!  I guess QRP antennas have limited power handling capabilities? 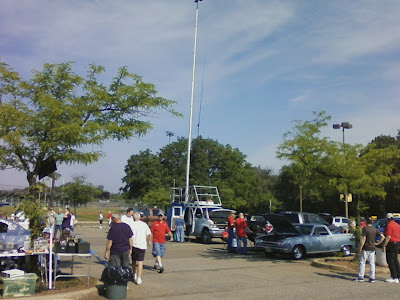 We also had some guys set up to do HF radio demos.  Alan W2AEW had his Icom 703 hooked up to his MP Super antenna that was mounted to the lip of the bed of his pick up truck.  We were able to hear some VKs on 40 Meters in the early morning.  The comm van with the pneumatic mast, courtesy of Brian N2MPM,  was holding up what looked to be a PAR EndFed. And on the top of the comm van was a Buddistick that was attached to a K3 inside the van.  This was the first time I got to see a K3 in real life.  I was surprised in a way, how much bigger it is than a K2.

But the best news of the day, by far, was learning from Bill W2WK that the Piscataway Amateur Radio Club is in the process of re-forming and starting back up again!  PARC was the best radio organization that I have ever belonged to.  To be extended a personal invitation to come back as a member was just the best part of a pretty good day.