Just in the nick o' time!

This week is the last week of regular operations for K6JSS/X, with TN being in the batter's box.  It's hard to believe that all 50 states have been on the air. Time has flown so fast, where has it gone?

I was watching QRPSPOTS and I saw several stations including my good bud, W3BBO making posts about K6JSS/4 being on the air on 40 Meters.  So I ran downstairs (literally) with my fingers crossed, hoping that the band would be quiet and that I could hear my quarry.

Happy dance time!  I not only heard Larry (familiar name) on 7.031 MHz, but he was 579 and was finishing up a QSO.  I tailended by sending out my call and got an answer and a 579 report back. Yay, Tennessee is in the log!  And wouldn't you know it?  Just as Larry was signing with me, sending "W2LJ DE K6JSS/4", just as he finished sending the "4", my S-Meter went from two bars to this: 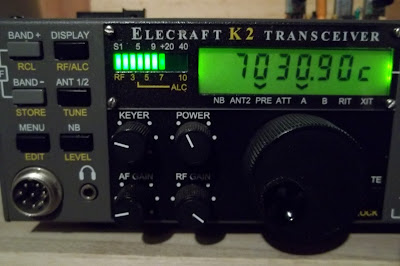 Almost full scale as the neighborhood QRN kicked in, rendering 40 Meters useless for the rest of the night (well, at least the next couple of hours, probably).

The next week or so will be spent making contact with the states I have missed.  Hopefully, SD, NM, and a few others will be gotten and I will have all 50 in the log to celebrate QRP-ARCI's Golden Anniversary.