Indian Summer is here!  For those of you readers who are not familiar with the term, Indian Summer is a warm spell that occurs in mid to late October, after the first frost of the season.  We had our first frost earlier this week, when the temps dropped into the 30s overnight.  Not a hard frost; but there was evidence of some hoarfrost on the grass one morning earlier last week.  This was followed by yesterday, where the high was in the upper 70s (25C) and today where the high was about 83F (28C).  Tomorrow is supposed to be just as warm and then I believe it is to cool down for the rest of the week.

The family and I spent a good part of the day today, picking apples and pumpkins at a farm in East Brunswick, the town where I grew up.  While most of the town is developed and suburban, there are big parts that are still rural.  This hearkens back to my very young days when East Brunswick was about 75% rural and farms.  Now that is probably closer to about 10 or 15%.  Anyway, in all we picked about 20 pounds (10 kilos) worth of apples and maybe about 40 pounds (20 kilos) in three large pumpkins.

When I got home, I managed to get some "on the air" time before dinner.  I worked T32C on 12 Meters for a third band.  The more I listen to that team operate the more and more impressed I am with them.  I can only relate about the CW side of things, but they identify after EVERY transmission which is great!  No guessing who's on the air here.  They work at a good clip; but they are not overwhelming with the code speed.  It's about 23 WPM which is very comfortable for me.  And they just seem to be super organized.  They are doing superb considering that. according to their press briefings, their main shipment container of gear never made it to the island.

After working T32C, I hopped on down to 20 Meters and worked Dick K2UFT who was on the air as N4V, a special event commemorating the Vibroplex keys that were made in Norcross, GA for a time.  Dick was really slick on the bug, it was a joy to work him.  And I was totally unaware of this special event, so it was good to run into him, as he explained for me what was going on.  I feel a bit embarrassed by that, as I try to stay on top of these kind of things so that I can pass them on to you all.  But Dick was a very gracious tutor and I always love working special events.  There are so many that never make an effort to put a CW station on the air - I was so glad to find this one. 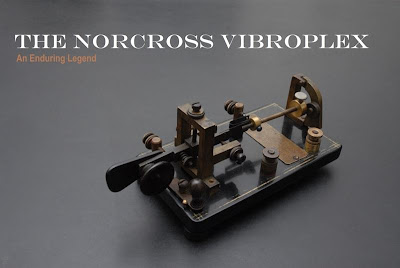 Lastly, I was able to end the day by working N4BP on 20 Meters as K6JSS/4 from Florida.  I had horrid local QRN on 20 Meters this evening; but Bob's signal was so strong that it rose above the noise like it wasn't even there.  It's nice to get a K6JSS station in the log so early on in the week.
Here's hoping that these good band conditions last for a while!
72 de Larry W2LJ
QRP - When you care to send the very least!
Posted by Larry W2LJ at 9:05 PM