now belongs to an op in Massachusetts.  But in the greater Northeastern part of the US, K2ORS will always be Jean Shepherd.  (Sorry Warren, no offense intended). 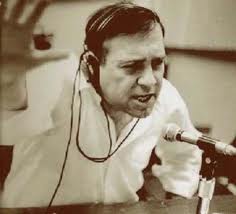 Anyone who has watched the movie "A Christmas Story" ("You'll shoot your eye out, Kid") knows Jean Shepherd, as he was the creator of that story.  But to a lot of us "baby-boomers" we know Jean Shepherd from his nightly radio show on WOR in New York City.  Many of us would sneak a portable transistor radio under our pillows, so that we could listen to his hilarious stories about school, life in the military and his famous stories about fireworks and the 4th of July as he was growing up.

Every now and then, he would talk about being a Ham and his experiences as being a "kid" Ham growing up in Hammond, Indiana.  Here's one of them:

There was a Website that someone referred me to once, where I was able to listen to his story about the time lightning struck his antenna and all the havoc that caused (including moving out of a rental house in the middle fof the night!).  Hilarious.

Email ThisBlogThis!Share to TwitterShare to FacebookShare to Pinterest
Labels: humor