I tooled around the bands this evening, listening for T32C on some frequency other than one in the 17 Meter band; but had not much luck.  As I was switching bands, I noticed that for some reason, 30 Meters seemed less noisy than normal for me.  And by that, I don't mean a lack of signals, I mean less background noise.  For whatever reason, it seems that most nights, 30 Meters has an S5 to S7 noise floor around here. Tonight that was not the case.

I heard a station calling "CQ DX" that was so loud (599 +++, lit up all the LEDs on my K2) that I was certain that it had to be a Stateside station looking for DX.  I was wrong. It was Oleg US7UX who is near Kiev, in the Ukraine.  Not one to pass up working a DX station, I threw out my call and got an immediate answer.  I wanted Oleg to know how loud he was and got a "TNX FOR 599 PLUS" for my efforts.  And in turn, I received a 599 report back.  Now normally, I would have said to myself, "Yeah, right!",  but from listening to Oleg handle other stations, he was giving out actual RSTs. I heard some stations get 559 and 579 and even a 449 report - so the 599 made me feel pretty good.  Just goes to show that when band conditions are right, even a 5 Watt station can be heard well.

I certainly hope that Oleg is as loud later this month when he is on DXpedition to the Marquesas Islands as TX7M.  And now it makes perfect sense as to why he was working everyone in such rapid fire succession - he's getting in some practice before his trip. 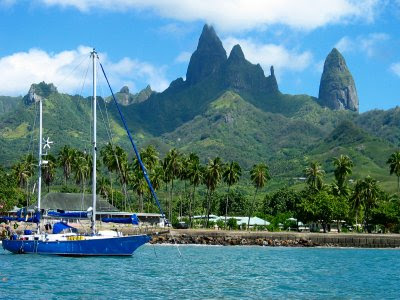 Marquesas, Christmas Island ..... dreaming of DXpeditions.  Reminds me of the adventures I used to dream about in my Novice days.