What?!?  Wasn't he complainin' about having to pay for WorldRadio just week or two ago?!?

Yes, I was - but when credit is due, credit is due.  I received the newest issue of CQ on Wednesday and didn't have time to go through it until yesterday, while I was sitting and waiting while having the Jeep's oil changed and tires rotated (for free!).  This issue is devoted to Emergency Communications, and while I know a lot of you could probably not care less about that, it was a wonderful read, anyway.  This issue is a good weapon to have in your back pocket the next time you get hit with that "Amateur Radio is obsolete and has outlived its usefulness" lie.

And, as if THAT wasn't enough, there were two fantastic columns - one on building by Joe KØNEB and the other on QRP by Cam N6GA. These guys write so well, that I wish they had columns every month!  But that's a terrible burden to place on them as I know how difficult it is to come up with original material for a monthly column. (Correction: Joe DOES write a column each and every month - sorry for my error, Joe!)

The new issue of QST, received the same day, did not capture my attention like CQ did.  Although the article on homebrewing a DSP speaker is appealing.  But Rich Moseson W2VU does come up with a superior publication month after month - and I will probably let the moths out of my wallet and will sign up for the "new" WorldRadio".  BTW, just so we're clear on this - I don't work for CQ or any of its affiliate publications. I'm just a satisfied (most of the time) customer.

Unfortunately, I have not been on the air at all this weekend.  With the arrival of Autumn, and the leaves on the ground and the wet weather we have been having this past week, my leaf mold allergy has kicked in big time.  I don't feel ghastly (yet) but I don't feel like myself, either and sitting behind the radio just isn't as appealing as it normally is.  That, and like John K3WWP, I think I have a kidney stone on the move, too.  Maybe later today, I can hand out some points in the QRP ARCI Fall QSO Party.

I have been looking at more cases for the PFR3A and am also considering this one. 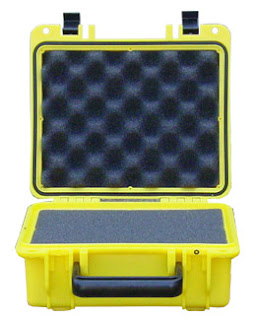 I like the fact that I can get it in yellow and that would match the PFR3A.

For those of you who like to participate in the Zombie Shuffle, Paul Harden NA5N has indicated that it will be held this year on Sunday night, right before Halloween. This should avoid conflict with the CQ WW DX Contest which begins that Friday night.

Lastly, for those of you who like to operate QRO, take a look at this.  THIS is a QRO station !!!!