After finishing with the lawn; I decided to try test the Butternut to see which bands are affected by that snapped wire.  The good news is that 10 Meters seems to be the only band that is wonky.  SWR is good on all the rest of the bands; but the best match I can get on 10 Meters is about 2:1. The internal tuner of the K2 has a fit getting there.  So next weekend, I will make like an antenna surgeon and will get that fixed.

I managed to work T32C on 10 Meters this afternoon using the 88 ft EDZ - so worse comes to worse, I have something for 10 Meters that works well.  Hey, any wire that will get 5 Watts from New Jersey to the middle of the Pacific Ocean is nothing to sneeze at.

I worked OX3XR on 12 Meters with the Butternut this afternoon and got an honest 579.  I absolutely love it when I get a "real" RST report from a DX station and not just the rubber stamped "599".  At least it gives me a decent idea as to how I'm really being heard.

In the evening, tuning around the bands, I saw that 30 Meters was decent for the second night in a row regarding background QRN.  No buzz saw, so I decided to call CQ.  I was answered by Terry W9UX and we had a bit of a chat. 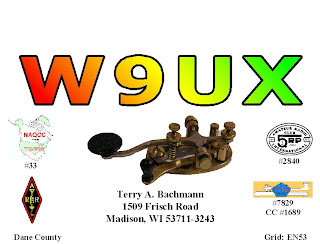 Courtesy of QRZ
I had worked Terry back in August as K6JSS/2 - it was nice to chat for a bit instead of just a basic exchange.  And anytime you can work a real nice fist like Terry has, that's even more of a special treat. He'll be operating in the NAQCC Anniversary Special Event later on this week; so keep an ear out for him as N9A.  In fact, all 10 call districts will be activated as "N#A", so keep an ear open for all of them. They will be active from October 10th to the 15th and your best be will probably be around the standard QRP frequencies.